When fifteen-year-old Clary Fray heads out to the Pandemonium Club in New York City, she hardly expects to witness a murder — much less a murder committed by three teenagers covered with strange tattoos and brandishing bizarre weapons. Then the body disappears into thin air. It’s hard to call the police when the murderers are invisible to everyone else and when there is nothing — not even a smear of blood — to show that a boy has died. Or was he a boy?

This is Clary’s first meeting with the Shadowhunters, warriors dedicated to ridding the earth of demons. It’s also her first encounter with Jace, a Shadowhunter who looks a little like an angel and acts a lot like a jerk. Within twenty-four hours Clary is pulled into Jace’s world with a vengeance, when her mother disappears and Clary herself is attacked by a demon. But why would demons be interested in ordinary mundanes like Clary and her mother? And how did Clary suddenly get the Sight? The Shadowhunters would like to know. . . .

Exotic and gritty, exhilarating and utterly gripping, Cassandra Clare’s ferociously entertaining fantasy takes readers on a wild ride that they will never want to end.

Ohh I missed The Mortal Instruments series! It feels so good to reread it again. I missed Jace’s conceited yet charming self. I missed Clary’s courageous acts. I missed Alec and Magnus Bane’s relationship (I love gays, so I love them!!). I missed Izzy’s fierceness. I missed Simon’s caring best friend acts. I missed Luke’s father-like figure. I missed almost all the characters!!! LOL

How could you not be hooked with TMI? With the very arrogant, witty, self-appraising yet charming and beautiful Jace as the lead guy. Why would you not fall in love? It is true, he’s somehow, well, confused with his life since he thought his dad was Michael Wayland, who has been killed by Valentines’ (the antagonist and Clary’s dad) men, Pangborn and Blackwell. But turns out that Valentines himself raised Jace and taught him how to fight like a Shadowhunter, how to kill demons and to extract those ‘slimy’ downworlders and just, plainly, how to be a Shadowhunter.

And Clarissa Fray, who we know better as Clary. She was raised as a normal kid by her mom, with a little help from Luke. She was blinded from the “Sight” by the High Warlock of Brooklyn, Magnus Bane. So she reached fifteen without knowing about the Shadowhunter world. Without knowing that fairies, werewolves, vampires and demons do exist. But her life turns the other way around and she is slowly catching up with the life she should have had.

Okay, so I just noticed that the story of TMI is comparable with ‘The Secret Circle’. Well, not that I have read the TSC books, I have just watched the TV show and I must say, there are things that are alike. Such as:

1. The Circle: So in TMI, Valentines’ generation had created a circle, a bond of friendship, something that would like to stand-up against the downworlders being one with the Shadowhunters. Same as with TSC, the generation of Amelia, (Cassie’s mom) had formed a circle.

2. Valentine Morgenstern and John Blackwell: They both have dreamt of power (though Valentine didn’t really say that he wants power, with what he is doing, that’s what I see.) They started of as wanting some change and would do anything for a “better world” for Shadowhunters/Witches. And both turns out to be equally evil and doing what has to be done, which involves a lot of killing and a little “acting” to get on the good sides of their children (Clary and Cassie).

3. Jocelyn (Clary’s mom) and Amelia (Cassie’s mom): They both ran away from their evil husbands, who were the leader of the circles. They tried giving their daughters a normal life, away from the Shadowhunters/Witches, which makes it harder for the girls to cope up with the lives they should’ve had.

4. And lastly, Clary and Cassie’s name both starts with a “C” LOL I thought I ought to include it here.

So there, I couldn’t compare more because the TSC had stopped airing and producing. So I don’t really know what happens next. I wish they continue it, though. I love that TV series!

Anyway, I couldn’t really explain how Jace turns out to be Valentines’ son and a lot more dilemmas in the book that has has gone out, you guys have to actually read the book and understand it yourselves. The story is nice! Wonderful, even. You will find yourself drawn into the Shadowhunter world.

I am actually rooting for Alex Pettyfer to take up the role as Jace Wayland. It suits him right? That badass personality, physically beautiful, Blonde hair, it suits him well. *sigh* too bad he wouldn’t be portraying him. Despite the crowd cheering him to be Jace.

But I am not to worry because another hot actor wold be portraying Jace Wayland/Lightwood/Morgenstern/Herondale LOL And he is Jamie Campbell Bower!! Yay!! *clap clap* He could be Jace also. I wish he’d be good in the movies though! I’ll be waiting for that! 😀 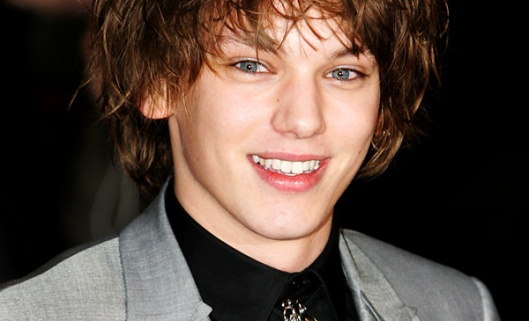 read 2 books toward her goal of 70 books.